Home Industry What the Casper IPO Fiasco says About the Future of Your Favorite... 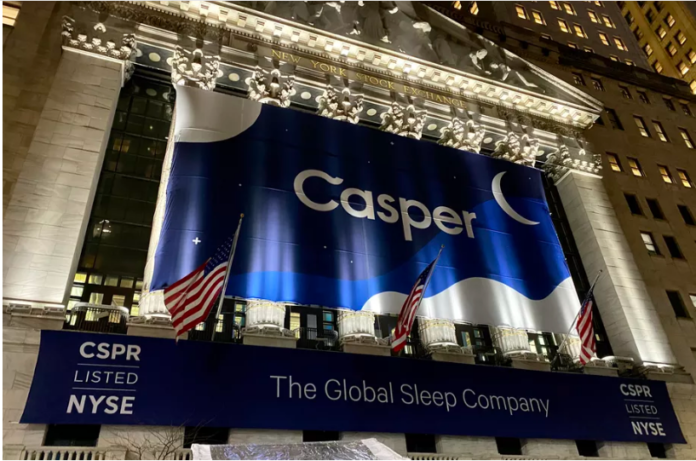 Casper went public on the New York Stock Exchange on Thursday morning, but much of the talk in the lead-up to the IPO was the startup’s recent struggles to get to this point.

The New York City-based mattress seller significantly cut the price at which it would sell shares to its first stock market investors, from an initial range of $17 to $19 down to $12 to IPO investors on Wednesday night. Casper shares started trading at $14.50 to the broader stock market on Thursday morning.

With the price cuts, the company implicitly acknowledged that public stock market investors thought the company was worth a lot less than the $1.1 billion number venture capital investors valued the company at just a year ago. And, in the process, it sent out a warning flare to other young, flashy consumer brands about the risks of incurring heavy losses in the name of rapid sales growth.

“I think it’s a confirming signal that when at scale, [public market] investors value growth balanced with profitability,” said Kirsten Green, a top venture capitalist whose firm, Forerunner Ventures, has invested in consumer brands such as Glossier, Bonobos, and Away. “Hopefully this valuation sets Casper up to be rewarded as it better balances for both.”

Balancing profitability and revenue growth might sound like a no-brainer business strategy. The venture capital industry’s heavy backing of digital-first consumer brands over the last decade, however, has pushed many entrepreneurs to pursue sales growth over profitability, with the hope of quickly stealing market share from traditional incumbents and worrying about their bottom line later.

The tactic is one that can make a lot of sense with tech companies selling subscription software that keeps clients around over a predictable and long period of time, or ones that benefit from network effects. But it’s proven to be a risky play when it comes to the sale of physical goods, especially ones that are bought as infrequently — and with as low of a barrier to entry — as mattresses.

In the case of Casper, the company has spent over $400 million in less than three years on marketing alone as it aimed to steal business from sleepy traditional mattress brands. Its bed-in-a-box model and 100-day return policy have helped Casper fend off dozens of competitors that have popped up along the way. But the heavy spending has come at the cost of profits.

Casper generated $312.3 million in revenue in the first nine months of 2019, up 20 percent from 2018. But Casper lost $67 million in the same period of time, which was 5 percent worse than in 2018. Casper proponents will tell you that the fact that its revenue is growing faster than its losses is one sign that it can pare back those losses over time. Critics say that the fact that its losses are still so heavy even as its revenue growth has decelerated is a reason for real concern.

No matter who’s right, Casper’s experience in the run-up to its public offering is just the latest signal to young consumer product brands that the days of pumping up sales with heavy marketing at the expense of profitability are probably gone — with few exceptions — unless you can find an acquirer that values things other than the current sustainability of the actual business. But the sale of a startup to a big industry titan has its own risks, as the FTC’s attempt to block the sale of razor startup Harry’s to Schick’s owner shows.

The Casper IPO also comes as the appetite for new, online consumer product brands has waned among venture capital investors.

And maybe that’s a good thing. The venture capital model is predicated on businesses taking big swings — and maybe, despite the rough stock market start, Casper will overcome the odds and hit a home run. But home run swings are riskier when it comes to the retail industry and the sale of physical goods. Which may lead to more consumer brands seeking a safer, more sustainable way.

Why Summer likely won’t save us from the Coronavirus

Gramin Healthcare: What the doctor ordered