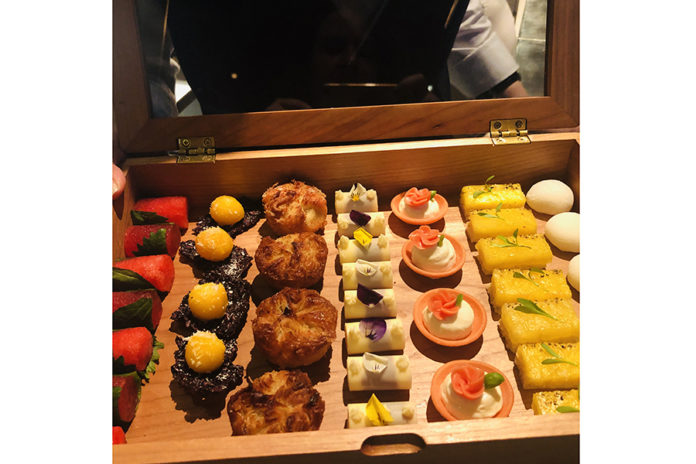 A food critic travelled the world to scour the ‘best restaurants’ for two magazines. The eating was constant, ridiculous and delightful, but also brutal—”It would be wrong to complain about what is obviously a dream job, but allow me one brief lapse to say: This was a very hard few months”

In an undated photo from Besha Rodell, petit fours in Hong Kong. Rodell visited six continents and traveled more than 100,000 miles during a four-month project for Food & Wine and Travel & Leisure magazines.
Image: Besha Rodell via The New York Times

On Mother’s Day, I lay sprawled across a bed on the top floor of a riad in the middle of a medina in Morocco, trying desperately to remember where I’d woken up that morning.

I couldn’t recall the room or the building where I’d been less than 12 hours earlier, but more distressingly, I couldn’t remember the country. As I listened to the long, low moan of evening prayers ringing out over Fez, the closest I could guess was Europe. That morning I had been somewhere in Europe.

For four months this year, I traveled across the globe eating myself silly, trying to find 30 restaurants worthy of the title “Best in the World” for a joint project by Food & Wine and Travel & Leisure magazines. In total, I visited six continents, traveled more than 100,000 miles and spent almost 300 delirium-inducing hours on airplanes.

In Fez, my mind whirled through all the places I’d visited that week: Paris; London; Cork, Ireland; Naples and Puglia in Italy; the mountains of Slovenia; Copenhagen. None of them were the answer. I could feel the synapses in my head sputter and fizzle. Humans were not built for what I was doing.

I finally gave up and checked my itinerary: That morning I had been in San Sebastián, Spain. I had spent my time there gobbling pintxos and freshly grilled seafood, sitting through long and elaborate tasting menus, and staring longingly at beautiful Basque cheesecakes in the marketplace. I was, heartbreakingly, entirely too full to consider buying one.

And, as always, I’d been contemplating the nature of the word “best.”

Best-restaurant lists invite well-deserved skepticism even when they’re confined to one country or city, but particularly when applied to the entire world. “Best” is an unquantifiable designation, subjective in every way (and a word I generally avoid in the Australia Fare reviews I write for The New York Times).

But there was something fascinating in the parameters laid out for me by the magazine editors, who would be collaborating to put out their magazines’ first global list of best restaurants. The sheer ambition of the project was staggering.

Usually, these national and international lists and accolades are created by asking many chefs, journalists and food lovers to vote, resulting in a huge popularity contest (the World’s 50 Best Restaurants; the James Beard awards) or by deploying an army of unidentified inspectors who measure every place against one strict set of standards (the Michelin Guides).

Both of these methodologies have their benefits and pitfalls. The biggest problem with popularity contests tends to be that they leave no room for as-yet-undiscovered gems. On certain lists, it would seem the restaurants with the best (and most expensive) public relations teams often win the day. And creating an exacting criterion for awarding accolades discourages diversity — in Michelin’s case, that means European and Japanese-style fine dining are generally valued above all else.

Because the magazines I worked with put together an international panel (of chefs, food writers, critics and others) that would nominate the places I’d visit, they tried to have the best of both worlds. Nominations were crowdsourced, but we paid special attention to promising places with little fame. Where the travel schedule allowed, I was given the freedom to follow up leads. The final call for what made the list was entirely my own.

All the ways I could get it wrong weighed heavily on me. But the thing I have always loved about classic restaurant criticism is how it allows readers to measure their own proclivities against the strengths and flaws and tastes of a tangible person. I have often found it more helpful to read a critic with whom I vehemently disagree than one who is moderately persuasive. If you don’t like or trust me, you can disregard my recommendations.

And so, I got on a plane. And then another.

The eating was constant, ridiculous and delightful, but also brutal. The glamorous version of this story is one that could be told with a vintage movie montage: a plane crossing a world map again and again, intercut with shots of me looking at various international landmarks and posing blissfully over plates of delicious food.

The real version is much more complicated. It would be wrong to complain about what is obviously a dream job, but allow me one brief lapse to say: This was a very hard few months.

Most days I woke up at 6 a.m. or earlier in order to catch a flight or drive multiple hours. In the afternoon I’d arrive in a new city, check into a hotel, shower, go to dinner, return to the hotel, spend an hour writing notes, fall asleep at midnight or later and then wake up the next day and do it all again.

There were many moments of sheer joy: sitting at a table in the Peruvian Andes, a moody clear light streaming in through the window, a procession of gorgeous plates of truly lyrical dishes appearing on my table; pulling up to the counter of the Swan Oyster Depot in San Francisco, eating its “Sicilian sashimi” (raw fish drizzled with olive oil, red onions and capers) and making friends with the people seated next to me; gobbling pizza in Naples, surrounded by families chattering in Italian.

It was hot in Mexico and cold in Canada. I got sick about five days into the trip, felt better within a few days and then got steadily worse. For days I became sicker as I traveled, lacking the space in my schedule to visit a doctor. I missed one plane during the entire four-month project, only because I was in a hospital in Atlanta with a 104-degree fever that doctors struggled to manage, even with fluids and medicine.

While I was hooked up to an IV in a hospital room, a nurse who was not involved in my care came into the room wearing a face mask. “How do I do what you do?” she asked, expectantly holding a pen poised above a notebook. “I’m a nurse, but this is not my passion. What I really want to do is travel the world, eating. How did you get this job?”

The doctors advised me to rest for a week. I was back on a plane the next day. And this was only the first trip of five.

My circumstances were never as dire again, but there were many other mishaps with visas, vaccinations and currencies. (I did get violent food poisoning the night before I boarded a 20-hour, multistop plane trip home.)I had constant support from both magazines, but they were often in another time zone. This project was so complicated, with so many moving parts, that it’s incredible things went as smoothly as they did.

It required a staggering amount of coordination and hard work on the part of two different staffs. Multiple editors, various administrators and two travel agents spent months working on the details of the trip. We had Google docs to track flight itineraries and hotel bookings, and others to track restaurant reservations — the time and address for each restaurant reservation, but also: What name is the booking in? Are they cash only? How will I get from the hotel to the restaurant?

There were many things the spreadsheets did not cover, logistics I would have researched extensively had I been traveling for personal reasons. But with a different destination practically every day, the unknowns were constant. Do cabs in Beirut accept credit cards? (No.) Will my cellphone work on top of a mountain in Bolivia? (Also no.)

The fine-dining restaurants were the easiest to identify as worthy or not — for every stunning, truly magical meal I ate in world-famous rooms, there was another just-as-famous restaurant that was stuffy and self-serious, wildly expensive and completely un-fun.

The Nomas of the world were predictably fantastic — but Noma has also spawned so many imitators (often led by chefs who spent time interning at the Copenhagen restaurant) that there’s a lot of sameness in the highest levels of fine dining these days. It’s strange, given the Noma chef René Redzepi’s emphasis on singular creativity and locational specificity above all else.

The thing I was looking for, that moment that distills the beauty and culture of the place where you are, happened more often in modest or midrange restaurants.

And sometimes it happened right in the midst of the infuriating logistics. In Slovenia, I was unable to find a cabdriver (as the spreadsheet suggested I do) to take me the two hours from the Ljubljana airport to my hotel. I improvised, rented a car and drove over the mountains to the Soca Valley. I spent that ride with my mouth agape at the alpine-fairyland beauty of Slovenia in spring, the tiny, ancient towns clinging to the sides of steep mountainsides, sprayed with tiny yellow and purple flowers.

I had to pull over several times to step out of the car and catch my breath and giggle and ask myself: How is this my life?

How to get the most out of your digital wallet

5 Tips That Will Boost Your Organic Chemistry

When is cool office design more than window dressing?

5 reasons you should send flowers to your loved ones