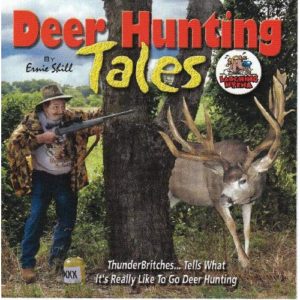 As anyone who’s hooked a big bass or displays a deer head above their mantle knows, the wait is worth it. But, whether you’re wearing camo and sitting in a rickety tree stand or relaxing out on the water in a rickety fishing boat, you need some good mood music.

Hunting and fishing songs are a dime in a dozen in country music, but there are several that stand out, and you will be in love with the following 10 tunes hook, line and sinker.

“Backwoods,” the third single from Moore’s eponymous debut album, became his second Top 10 hit, and it’s not hard to see why. Any country music lover with a penchant for the backwoods will relate wholeheartedly to this song. The song took 20 minutes to pen, and with an uptempo beat, it can get any hunter fired up for another day (or night) out in the backwoods.

Currington’s album Enjoy Yourself features one song he co-wrote on, “Bad Day of Fishin’,” and the tune will make you smile even after, well, a bad day of fishing.

A double-barrel 12-gauge sits above the mantle on a couple of rusty nails, and though it’s worth a lot of money, Shelton sure isn’t going to give it up — because it’s grandaddy’s gun. The last track on Shelton’s Based on a True Story is one of the record’s highlights. “Grandaddy’s Gun” is one of Shelton’s more personal and introspective songs; it showcases nostalgia in the form of a gun, and someday, Shelton sings, he’ll give it to his son.

Can you catch a five-pound bass? Keen sings about it on his 1989 album, West Textures, and this tune is especially poignant if you’re lacking a little confidence about catching anything — because Keen is sure he’ll catch a bass that’s as big as a baby. With coffee and a honey bun in his stomach, a perfect spot among some old dead trees, and a whole bunch of optimism, Keen does what he came to do: catch that five-pound bass.

Bryan sings in this hilarious deer hunting song, as an avid hunter knows, sometimes the only deer you see is a green John Deere — but even if that happens, it was still a good day even if your only target is empty beer cans — and for some strange reason, they keep moving.

Adkins’ “Just Fishin'” received a Grammy nod for Best Country Song, and it’s not hard to see why. The track is utterly heartwarming: It’s a song about a father fishing with his daughter — and so much more. They’re not “just fishin’,” as his sweet little girl thinks.

Anyone who loves deer hunting can relate to Turner’s “Backwoods Boy.” He describes waking up at 5 AM, putting on his camo, wiping off his .243, and firing up his Dodge. It’s a familiar scenario for all hunters, and when they hear Turner sing, “If I’m here eight hours from now / It’ll be okay, yeah,” every hunter nods along.

Invest some time creating your hunting and fishing songs playlist with the top songs. Whether it’s played in the truck, on the boat ramp, or from the skiff is up to you. But you’ll be surprised what adding a bit of music can do to long hours on the water or hunting.

The Importance Of Diversity And Inclusion Training

Bitcoin a joke? People thought that about the internet too.

Benefits of Renting A Car

7 Reasons Why you Need a Water Dispenser