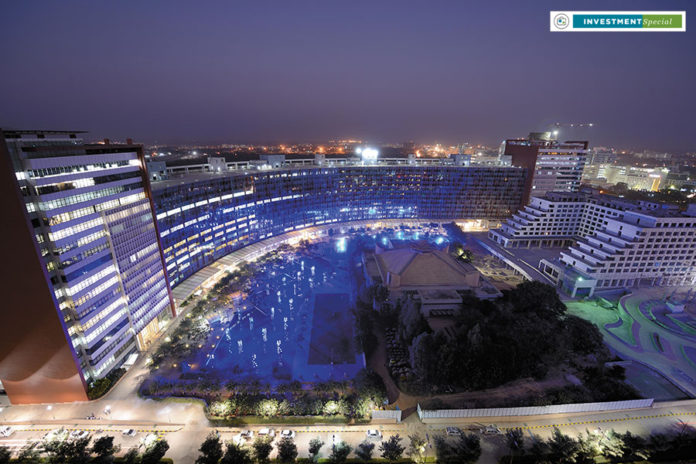 Estimates peg yields from residential real estate at between 2 and 5 percent and commercial between 8 and 10 percent
Image: Frederic Soltan / Corbis via Getty Images

India’s real estate sector has been in the doldrums for a while. Unsold inventories were a nightmare for builders even as prices remained stagnant. Besides, a glut in the economy, caused by demonetisation and the Goods and Services Tax (GST), had thrown the sector off track. But there appears to be a ray of hope.

In February, the government reduced sales tax on under-construction residential houses from 12 percent to 5 percent and offered tax sops for affordable-home developers. That apart, its decision to allow rollover of capital gains into two residential houses instead of one is a big step.

“The Indian real estate is riding on a new wave of optimism, following the triple benefits offered to it by the government in less than two months,” says Anuj Puri, CEO of property consultants Anarock. “Acting like booster shots, these sops will not only spike homebuyers’ sentiment but also boost confidence of other stakeholders like builders and long-term investors.”

“The already prevailing liquidity issues—further exacerbated by the NBFC crisis in the last quarter of 2018—were anticipated to have a cascading effect on the residential sector in early 2019,” says Puri. “However, the concerted efforts by both the RBI [home loan rates have fallen following the central bank cutting repo rates] and the government are aiding in at least boosting the confidence of homebuyers. These sops will help fence-sitters take the plunge and increase sales for builders who are keen to clear their total unsold stock of 6.73 lakh units across the top seven cities.”

As far as commercial real estate goes, data from Anarock indicates that total absorption across the top seven cities in five years crossed 168 million sq ft, increasing year-on-year, with only 2016 seeing a decline of 8 percent. In terms of supply, the seven cities saw over 162 million sq ft new office stock added between 2014 and 2018. There was a 19 percent increase in 2018 compared to the preceding year.

As an investment opportunity, the residential real estate sector hasn’t garnered much attention as yields continue to be low. Estimates peg them to be between 2 percent and 5 percent. Commercial properties, in comparison, get between 8 percent and 10 percent.

“The commercial real estate segment has been performing well for the past couple of years, as global and Indian corporates continue to enter and expand their footprint across the country,” says Anshuman Magazine, chairman and CEO, India, Southeast Asia, Middle East and Africa, at CBRE, a global real estate consultancy. “India’s strategic advantages of cost and availability of talent and real estate have ensured that despite a volatile external environment (particularly the global economy and US’s anti-outsourcing stance), the country’s commercial sector continues to perform well.”
According to CBRE, by the end of 2018, Bengaluru, followed by Delhi-NCR, Hyderabad and Mumbai, dominated office space take-up last year, accounting for almost 80 percent of the overall transaction activity. “A significant amount of new space is expected to be released in the decentralised locations of leading cities over the next few quarters, particularly in Hyderabad, Bengaluru and Delhi-NCR,” says Magazine.

Indian real estate developers’ debt burden shot up from ₹1.2 trillion in 2009 to ₹4 trillion in 2018 Despite the silver lining, problems still persist. “Stalled or delayed projects have diminished buyers’ faith in under-construction properties,” says Puri. “This issue must be addressed via measures to ensure that such projects are either completed or buyers are refunded in full.”

Much of the current crisis was because of the reckless development by developers between 2011 and 2018. As consultancy firm Jefferies writes in a report dated March 4, “Most developers didn’t reach this point on bad luck but had reacted to the slowdown through a debt binge—they kept on increasing the property prices to account for rising costs and slowing sales. Of course, that didn’t help as the stock of finished inventory for the top eight cities more than doubled between 2011 and 2018. But it also artificially inflated the inventory, allowing developers to borrow more and remain solvent, and some lenders were more than happy to oblige owing to easy availability of finance. Now, with limited recourse to refinancing or rollover, the debt-fuelled structure is at a risk of imploding.”

While that may not happen, many real estate companies face the risk of payback kicking in soon. According to Liases Foras Research and Rating, Indian real estate developers’ debt burden shot up from ₹1.2 trillion in 2009 to ₹4 trillion in 2018.

“India’s real estate sector is witnessing a phase of recalibration due to various policy reforms in the past 2-3 years, such as RERA [Real Estate (Regulation and Development) Act], GST, demonetisation, The Benami Properties Act, etc,” says Magazine. “These reforms have brought greater transparency in the sector.”

Experts reckon that the sector needs a bigger game plan than just temporary relief measures. “There must be level-playing in taxation between under-construction and ready properties,” says Puri. “We must reduce the dependency of builders on expensive external funding sources like private equity by proactively easing lending norms and also boost consumer confidence.”

Then there are other steps, says Magazine, that can end the slowdown. “There is a need to accord more tax incentives,” he says. “There is also a need to spur more investments by encouraging private investments by providing land at subsidised rates, enhanced floor space index for affordable housing, tax incentives and rebates on construction materials, etc. Also, by promoting a single-window clearance mechanism, the approval process for large real estate and infrastructure projects would become easier and improve delivery schedules. Finally, granting infrastructure status to the sector will provide a further boost.”

(This story appears in the 29 March, 2019 issue of Forbes India. You can buy our tablet version from Magzter.com. To visit our Archives, click here.)

3 THINGS THAT WILL HAPPEN IF YOU TAKE WRONG DEDUCTIONS

Investment options to pick, if you have a one-year horizon

How to successfully take an FMCG brand to market

The First American Death is Reported in the Wuhan Coronavirus Outbreak

Why tax professionals are re-writing their CVs

Who pays for Amazon’s “customer obsession”? The service reps who pick up the phones.